The Whalesharks of Oslob

On our recent trip to the Philippines we were invited to visit the famous, but controversial, Whalesharks of Oslob. In the past, we had heard some negative reports about this experience and so it was with some trepidation that we agreed to go. First, we chatted to the team at Magic Island Dive Resort about what to expect. They told us that they used to boycott this experience themselves, as they had witnessed bad practices and only in the last few years, with tighter regulations being imposed, have they been taking their divers back to Oslob. With this expert local knowledge reassuring us, we packed up our camera gear and set off. 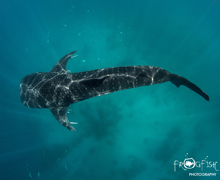 So, what goes on here? Well, for many years (some say over 100 years), way before it was a tourist attraction, fishermen have been feeding the Whalesharks that approach their boats, to keep them away from the nets and causing damage as they try to suck the tiny fish or shrimp through the small holes. In recent times, when people heard you could get up close with the magnificent fish, this practice started to bring in tourists. Now, the fishermen and the local village, make their livelihoods by selling tickets to see the Whalesharks. Tourists flock to Oslob in their thousands to get the chance to see and swim with the biggest fish in the sea.

We had arranged to do a dive first, as Magic Island Dive Resort is an accredited dive centre for this experience, and they are one of only a handful that are allowed to go beneath the surface.  We geared up well outside the protected zone, as boats with engines are not allowed, so we shore-dived and swam towards the main attraction. Soon we were marvelling at the Whalesharks above us as they approached the boats to be fed. Our guide counted 12 Whalesharks, and they were mostly small to mid-sized juveniles. Sometimes the Whalesharks would dive deeper and come in to inspect us before returning to the surface. Our group of five divers and two guides were the only divers in the water, and we had an hour to spend underwater (one of the many rules of diving here). From below, you get a completely different view of this experience, and we were amazed at just how few people got into the water with the gentle giants. 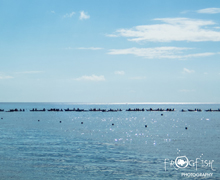 To see what this experience is all about though, we also wanted to join one of the boats to snorkel with the Whalesharks, which is what the majority of people who come here do. At first glance, it looks too crowded and we were worried about what we might encounter. We got into our boat that was paddled out to the main feeding arena. You only get 30 minutes and so we were ready to get in as soon as our boat was in position. The number of boats out on the water, as well as the number of feeders, corresponds to the number of Whalesharks in the bay on that day. As there were 12 sharks, it seems that there were about 12 tourist boats too, so perhaps around 100 people every half an hour (from day break to lunchtime) going to see them.

We were very surprised to see that most people just watched from the boat, or got into the water, but held onto the boat, so there were only a handful of people in the open water. This made it a much more pleasurable experience than we were expecting. We were given very strict instructions on not approaching the sharks: we could not use strobes, we were not allowed to wear sun cream and we were told that getting too close would see us getting a red card and sent out of the water. We were delighted to see that, when one snorkeler broke these rules, he was sent out of the water immediately. The Whalesharks themselves were incredible, slowly approaching to be fed, sucking the tiny fish from the water just in front of us, sometimes horizontal, and sometime positioned vertically in the water to feed. It is amazing to see. 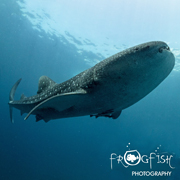 We had heard stories of Whalesharks that had terrible injuries from the boats hitting them, but the boats here do not use engines and the only injury we saw was the bottom of a tail missing, which is unlikely to have been a propeller injury. We had heard stories of tourists grabbing or even riding the sharks, but this was not our experience at all. We had heard that the sharks never leave, but they are free to come and go and most only stay a few days and then move on, with one individual out of the hundreds that have been recorded here staying for over 300 days, in a very rare case.

As with many shark-feeding programs, the worry is that we are changing the behaviour of these Whalesharks by the very act of feeding them. There is a research organisation called LAMAVE that are based in Oslob and their researchers are in the water every day. They have a database of Whaleshark IDs so that they can monitor which individuals are visiting the site and for how long.

Whalesharks are a migratory species that follow their food sources around the globe. LAMAVE have discovered that a handful of Whalesharks stay much longer than would be normal in this area and so their behaviour has changed. Most, though, stay for a short period of time and then move on. Of course, Whalesharks may also mistake other boats, not in this protected area, as potential food sources and therefore be more prone to propeller strikes in the future. We only did one snorkelling session and did not see any bad behaviour from the snorkellers, apart from one, who was swiftly dealt with, so we hope that this side of people’s concerns have been reduced.

The local economy is now not based on fishing as it once was, but instead is based on showing tens of thousands of people these magnificent fish. There is a new school, hospital and infrastructure in the region, funded by the tourists that come here. We were delighted to see a boat of local school children pull up next to ours, and to observe their excitement at seeing Whalesharks for the first time, in the wild, was wonderful. The more people that fall in love with our seas, oceans and marine life, the more likely it is that they will protect it. Here, the Whalesharks are worth more alive than dead with their fins cut off; it is a trade-off that we can live with.

There is so much more we could write about this, but it will have to wait for another time. We were expecting our experience with the Whalesharks of Oslob to be a negative one, based on the stories we had heard, but in fact we came away having enjoyed it and we were re-assured that it is not a circus. This is not for everyone, that is for sure. It is not a wild encounter. We hope that the work of LAMAVE will continue to improve how the experience is run, so that the impact on the majestic Whalesharks is kept to a minimum, giving divers, tourists and locals alike a chance to see one of nature’s gentle giants up close.