What’s that you say? Maybe you would be more familiar with the name “Shaun The Sheep” and for those of you who are now thinking of the little cartoon character, you are still a miss. 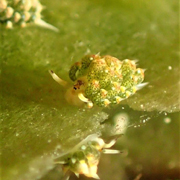 The similarities with a sheep are not the only special thing about this little guy. This tiny little creature can do something that no other known animal in the world can do, Photosynthesis, as we all know, plants do this all the time but, Shaun is the only animal to be able to produce food this way through a process called Kleptoplasty. The ability to incorporate chloroplasts from the algae, assimilating them into its body and then using them to carry out photosynthesis, producing food for the nudibranch. So, basically this little guy is “solar powered”.

If you are interested in seeing and photographing this little guy then don’t worry! This photo was taken right outside of Magic Island Dive Center on our house reef. You would probably need a guide or a very keen eye, if you look closely at the photo you will see there are three of them, and that is on just one blade of grass, so they are small, very small.