The fascinating history of Moalboal

Since 1970 Moalboal has evolved into a main tourist attraction due to its breathtaking underwater paradise, and has now become one of the top scuba destinations of the world.
There are some fascinating stories on how Moalboal got its strange name and most people struggle to pronounce it the correct way.

One legend has it that a Spaniard was walking around the place and found himself close to the hot springs. He asked one of the locals what this place was called, meaning the town. The local thought he was asking about the spring and replied “Bocal-Bocal”, which translates to bubbling water. Unfortunately, the Spaniard was hard-of-hearing and heard “Moalboal” and so the name was born. 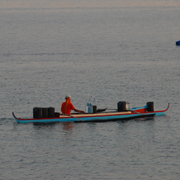 However, not everyone believes that story. Some people say that Moalboal, comes from the word ‘Bol-anon’, what refers to the local people from the neighboring island of Bohol.
Laurente Sabanal was a “Bol-anon” and was captured by the Spanish for killing a ‘Guardia Civil’ – a Spanish police officer. Although; he managed to escape and fled from Bohol on a small boat finally landing in Moalboal. It is said he was taken in by the beauty of the place with its wide fertile plains and the ocean full of fish, so he decided to make it his home.
Although he was taking a risk of recapture, he travelled back to Bohol, collected his family and invited some of his closest friends to go with him, so the village Moalboal was born.

The place prospered and grew, eventually becoming a small town and Laurante also known as “Laguno” became the first ruler. This is where the story takes a turn towards the unbelievable, it is said by many that Laguno had magical powers known as Yam-Yam where he could make objects float around in the air. He would use this magical power to scare away raiders who would come to terrorize the town and steal their 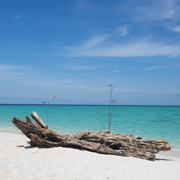 wealth. This kept the town safe and it prospered even more.

When Laguno died he was buried in the sandy shore line of Moalboal and a log was placed as a marker and to symbolize his extraordinary life. It was said that if you tried to cut the log, it would bleed blood; unfortunately, the log was washed away during a recent typhoon. Although locally, many believe it was Laguno who finally escaped again and set off to settle in another place of beauty.