Sea turtles are one of the best-known creatures in Moalboal, Cebu and you will definitely spot at least one during your dive around here. Do you know everything about sea turtles? 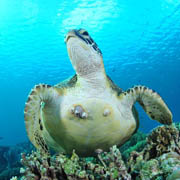 1. These creatures have existed on earth since 100 MYA, the era of dinosaurs and are considered to be one of the most ancient creatures. They are commonly found in warm and temperate regions worldwide.

2. They migrate long distances to feed, find a mate and for the female to find nesting grounds.

4. There are five species of sea turtle that can be found here in the Philippines; they are the green, loggerhead, hawksbill, olive Ridley and leatherback.

5. Each species relies on a different diet some of them are herbivores, carnivores and omnivores. They commonly eat seagrass, seaweed, crabs, shrimps, jellyfish, mollusks, and sponges.

6. Turtles are air breathing animals, but they can stay underwater from one to five hours depending on their activity.

7. Depending on the species, sea turtles are a variation of colors including green, yellow and black.

8. Adult ones reach sexual maturity and are able to mate at the age of 12 years depending on the species.

9. Mating season starts from March to October. Females lay between 50 to 250 eggs that will hatch in 6 to 10 weeks depending on the species

10. It is not known exactly how long turtles live in the wild, but scientists think their life span may be more or less one hundred years.

If you would love to see a hawksbill, loggerhead or green sea turtle then hurry up and come and dive with us here in Magic Island Dive Resort in Moalboal, Cebu, Philippines. You will be awe-struck by their impressive numbers and sizes here and we guarantee you that because we have many dive sites that they like to hang out on.